Suzy Rice is an Attorney and Counselor at Law, with the Law Offices of Susan Rice. As one of the most recognized trial attorneys in the State of Texas, she brings over thirty-three (33) years of trusted Corporate and Commercial business litigation experience to the courtroom, as well as being the founding principal to one the most comprehensive law firms in the state, dedicated to preserving the legal rights of Texas Homeowner Associations, Corporations, and Developers, in 24 counties across the state.

Recognized by her peers as a tenacious litigator who is fiercely loyal to her clients, she brings a highly competitive mindset to defending the rule of law. The cornerstone of her remarkable success in the courtroom at the state and federal levels, is directly attributed to her analytical understanding of the nuances of law, and how their ambiguities are applied to the ever present grey areas. She is resolute in the fact that when seeking a legal remedy for a client, “you own their problem until it’s resolved”. It’s this philosophy that compliments her areas of practice, which include; 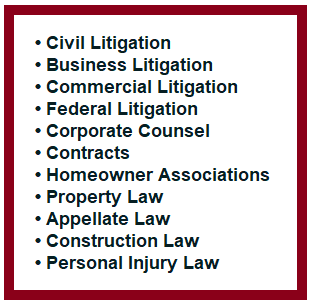 Suzy Rice brings a resume to the table that is second to none. She has been personally responsible for several ground breaking Texas Court of Appeals published opinions, that have had a direct impact on the legal landscape in Texas. She is also actively working with the Texas Legislature on legislation that will positively impact Homeowner Associations, which she has done in the past because she co-authored Chapter 204 of the Texas Property Code. She is also the recipient of an “AV PREEMINENT RATING”, which is the gold standard in the legal profession. This significant accomplishment demonstrates that a lawyers peers and judges have ranked him/her at the highest level of professional excellence, and it is awarded to less than ten percent (10%) of all attorneys in the United States.

Suzy Rice, received her (JD) Juris Doctorate Degree, from South Texas College of Law Houston, where she graduated in the top ten percent (10%) of her class. She received her (BS) Bachelor of Science Degree and Master of Arts Degree from Sam Houston State University, where she also graduated with honors and served as a graduate teaching assistant while she was working on her Master of Arts Degree.

As a member of the state BAR, she is licensed to practice in all State District Courts, State Appellate Courts, the Texas Supreme Court, and the United States Southern, Western and Northern Districts.

Attorney and Counselor at Law